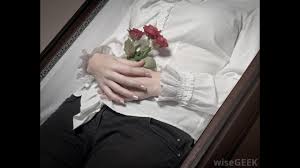 The whistling caused by the wind forcing it’s way through the crack in her coffin. Made Abella’s eyes open halfway looking at the satin casket that was made for her as a present by her late mother.

She never used it until now. She tried her best to stay still as her burns healed but with every movement the pain reminded her of what occurred to get her there.

She will be included on her on the death list. Accidental deaths happen a lot in  nests there size. She had loyal followers that would do anything for her.

A thought of getting rid of Makalo had crossed her mind but she could not for the life of her see him dead. Not until she figured out how to give him a child of her own.

Being a full blood vampire she should have failed at conceiving at least once but his inattentiveness to her needs, played a big factor. He had to have another on the side. His appetite was being quenched by another and she will find out who.

She began thinking of Adorjan. He can not live to claim his birthright. He is of age but he is a blithe that needed to be rubbed out. Once she arises she will go about things a bit differently to get what she wants. It will start with, “Morgan.”

Makalo felt a twinge of guilt for snapping his daughter’s neck to knock her out. But she will be coming around, shortly and he did not want to get in an argument at the moment.

He placed her on her bed and walked out of her chamber. He had to see what had come to his home leaving Lurkspur in charge.

The house seemed the same but it was odd that the night maids were not tiding and he did not hear the rustling of pots in the kitchen.

Makalo had human servants and he treated them well. It was oddly normal.

He reached out his senses and hit a twinge in the forest behind the (House). Lurkspur was shielding what ever fowl play he was up too.

Immediately he rushed to the area to be greeted by the naked maids and the servants in the kitchen.

Makalo located Lurkspur in the distance being ridden by Yolanda and is feeding off Phillip at the same time. He knew his appetite would get the best of him.

“Lurkspur enough. Undue this trance at once or I will banish you from here forever.”

Lurkspur blackened eyes and elongated fangs dripping with blood looked at Makalo. he was in full feeding phase. Only an inkling of knowledge of what was going on had seeped into his blood hazed conscious.

Yolanda screamed out her orgasmic completion and fell onto her side. Lurkspur rose with his shaft still at attention. It looked as if he was struggling to come back but he bared his teeth to Makalo in defiance.

Makalo had had enough and took down Lurspurs ward. He was at his throat faster than Lurkspur could protect himself.

“Sorry old friend but you should have had more control.”

Lurkspur lashed out and tried it’s best to get Makalo’s grip from around his neck.

Makalo waited until to his blood lust faded and Lurkspur return to it’s rightful mind.

“Makalo I’m so sorry. I wanted to have fun and it turned into…”

“I’ll see you in the next millennia.”

Makalo released it and walked away. “Do not drink another drop or it will be the last drop.”

Makalo was tired yet his mind kept drifting to Adorjan and how he was doing. He’ll think about it at sun set. He was tired and he had to make sure Lurkspur left his home and county.

Leo sat against a large tree watching Adorjan looking at the moon.

“Why haven’t you drank any blood?”

Adorjan looked at him and not really wanting to answer him he did anyway.

“You may stay the same. It’s not bad letting your self be fully who you are.”

Before he could answer that remark, Creya came back with two rabbits. Adorjan took them and began to clean them up.

Creya and Leo watched how skilled he was at cleaning the animals and preparing them to eat.

“Who taught you to do that?”

“My mother and grandmother. They taught me many things.”

Leo let out a chuckle and that statement.

It took over forty five minutes to cook them sufficiently to eat.

Creya had one and so did Adorjan even though his stomach was acting odd.

“Next time leave them a bit bloody. Your stomach won’t hurt so much.” Leo said as he rose.

“Where are you going?”

“Why do you want to join me Creya?” He asked as his eyes conveyed hid true meaning.

“I’ll be back soon. Just call out if you need me. I’ll be close enough to hear you both.” He said looking at Adorjan.

Creya shrugged her shoulders and gave a non answer.

“Oh you mean mate him? I never thought of him like that. Lately he’s been coming on strong but I don’t know?” She stood up and stretched again this time Adorjan kept looking at her.

She went over and kissed his cheek. “the rabbit was good thanks.” She whispered. Then licked her lips.

His body was reacting to hers but he refused to act what if he killed her?

“One day you’ll know. Just not today. I want us to stay the way we are now. I’m tired.” she picked a spot next to the fire and laid with her back towards him.

Her jeans cradled her full bottom but revealed just enough to make his mouth water.

His could not move or else he body would reveal what it wanted. He decided to do the meditative sleep to calm his blood down. It’s gonna be a hard night.

So how is it so far my fire starters. Are you feeling the urge to write me a comment or two. Well feel free and like as well. Until next we meet. Fia xoxo (owned and copy written by fia)