Fantasy Friday (In the Throw) 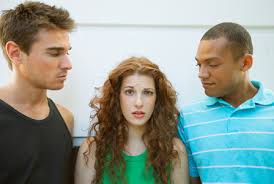 The meeting with the two godor men continued into the night. It took a lot of time persuading them, that the Oni was on its way to destroy them along with every other planet in the universe.

Once the leader Dolu agreed to help in the battle. He still did not trust the Anorie but he will protect his people.

Loeum started to speak to them and pointed off to the east of where they stood.

“He has invited us to go and stay the night with the Godor people it would show trust between the two leaders.”

Jayla looked at Lorac and she could tell he did not like that idea.

“Tell them to thank you but since Lorac and I have just mated that we want to return home.”

Le’em translated the information and the men nodded their understanding. Before they left Loeum walked up to Le’em and spoke.

(I do not know if you are mated but my beast recognizes you as one of us and I want you.) He said to her, causing her beast to purr slightly. Her cheeks inflamed a bit from embarrassment.

Sanu and Elphin watched what was transpiring and their beast began to claw at them.

“What is he saying Le’em?” Elphin asked.

She did not want to destroy the agreement to fight together so she decided she would bend the truth a little.

“He said that their beast recognizes me as one of their own and I am welcome.”

“You tell him that our beasts recognize you as well and you are coming home with us.”

Le’em looked at Elphin not understanding the anger.

“Le’em thank him nicely and explained that she is half anorie as well. ”

Loeum looked surprised but he did not waver in his claim on her. He nodded that he understood and went back to Dolu. Both Godor left without looking back.

The group trekked it back to the ship.

Le’em did not say a word to Elphin but said good night to Sanu. Sanu looked at Elphin standing more erect with a look of a winner. Elphin and his beast both stormed off.

Lora tried to hide the smile on his face. Sanu looked at all three as if he did not get what was so funny.

“Lorac I will talk to her tomorrow. She does not know what happened with the men this evening. Her sense of smell is not heightened so she did not realize that they both desire her.

“Jayla it is not only two but three. That male Loeum wants her as well.”

“Well, we do have a problem here.”

“Not necessarily. She has two beasts inside of her. I do not think one male will satisfy both beasts.”

“Jayla looked at Red T and knew what he was saying is true. Sanu overheard and he looked enraged and stormed off towards their people. Jayla looked at Lorac to explain.

“We do not share mates. He would have to share and he may not be able to do that especially with a godor.”

This was going to get messy. She will talk to Le’em and make her understand that she should not choose anyone until the mission was over. They needed the Godor’s help desperately in order to defeat the Oni.

Red T woke with a start. He was floating outside his body and observing the Aiac nebula when a sound made him return to his body.

Another loud crash came from outside his quarters. He got up and ran towards it to discover that Elphin was in his beast form and Le’em was against the wall in the sparing area.

“Le’em leave now and go to your quarters.”

“I just mentioned that I would like to see Loeum again and he turned.”

Le’em ran out and Jayla accompanied with Lorac came in.

“When a male is near his potential mate his protective instincts appears. He can not control it.”

“What do we do?”Jayla keeping an eye on both Elphin and Red T.

“I will get Sanu. He is not feeling the throws so he is definitely not Le’em mate but he is willing to fight.”

“Yes, he will make himself as the threat.”

Red T  made sure to keep himself in Elphin’s view.

Lorac went out of the ship and let out the most urgent roar calling Sanu to him. Elphin’s head turned to the sound and let out his own challenging roar.

“So we are on first name basis now?” He said with a slight chuckle.

Jayla did not realize she had done that and smiled.

Lorac came back with a large beast by his side. That had to be Sanu. As a beast, he had at least a foot more in height.

Red T slid out from being in front of Elphin since his focus was no longer him. Sanu’s beast turned and ran out of the ship causing Elphin to follow. Lorac, Jayla and Red T was right behind them. Sanu stopped ten feet away from the ship.

The Anorie people were there to witnesses the fight to make sure it was fair. Elphin and Sanu circled each other gageing each other’s weaknesses.

Elphin pounces and landed a bite on Sanu right shoulder. Sanu was able to turn and bit on Elphins leg causing him to let him go. They both stared each other down and roared showing their strength.

Sanu swiped his paw across Elphins face, leaving tracks across his muzzle. Elphin pounced again causing Sanu to land on his back.

Sanu took a bite on Elphins shoulder causing him to leat out a roar. The Anorie people roared as well. Elphin pulled his power forward and went for a killing bite. Sanu’s neck. Once he clamped down Elphin felt a something large hit him on the side causing him to release Sanu.

The Anorie people roared in approval. Elphin was the winner. Elphin turned back into his human form his beast was satisfied. He looked up and seen what his beast had done. Sanu had changed back and he was being stared down by Lorac’s beast. He lowered his head in respect.

Lorac changed back and went to Sanu to see if he was harmed. Sanu stood and went to Elphin and gave him a respectful nod to show he conceded.

Le’em witness the fight from the ship. Jayla went to her and whispered,  ” Elphin is attracted to you and you did not notice. You two have to talk but can you put it off until after the battle.”

“But I am attracted to Louem. This is crazy.”

“Le’em why can’t you have them both? You are a half breed and I am pretty sure your beast are attracted to their own kind.”

“Well start thinking of you with two and putting off that talk will give you time to figure this out.” Jayla walked onto the ship leaving Le’em with her thoughts as she looked at Elphin.

After everyone disbursed. Elphin went to  Le’em. I wanted to tell you how I felt but you kept talking about Louem and my beast could not take it.” He looked down at the ground then at her.

Le’em smiled and said, “We’ll talk after the battle.”

“So no more talking of Louem, right?”

Le’em smiled and walked into the ship. Red T was standing off to the side and heard what transpired between them.

“Elphin we need to talk and I advise you not to act until the information has sunk in.

Elphin did not like the sound of that. But he followed Red T on to the ship to his quarters.

The Captain heard what happen later. He went out to scout the scientist facility to see what they were up to and it was not good.

Hello, my fire starters. I hope you all are enjoying what is unfolding with the story. If you do please like and support by following. Comments are welcomed.