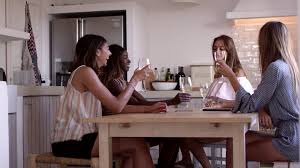 The mating ceremony is only a day away. Le’em beasts seemed to be causing havoc inside her. They are extremely happy about finding their mates. Le’em, on the other hand, has reservations about the situation. She has never been with a male and now she had to be with two and two beasts on top of that. Just the thought of it was making her ill from nerves.

A beep came from the door of Le’em’s quarters. She pulled her thoughts together as best as she could before she answered the door. Once the door opened she was face to face with three women. Two that she knew and one that was new to her.

“Hi Le’em I thought this would be a good time to talk to you about the ceremony tomorrow,” Jayla said as she kept looking into her eyes gauging how Le’em was feeling.

Once the ladies were inside they stood before Le’em making her feel more nervous than what she wanted.

“So I know Jayla and Januk. But I don’t recall ever meeting you before.”

“I am Cardidia. I am the healer for the godor people. Also, I am the advisor to our young females of the clan. I was told by Loeum that you were raised with the humans and he thought my insight on the godor mating would be valuable at this time.”

Le’em unconsciously rubbed her arm across her stomach try to relax.

“Thank you, for coming. I guess Jayla and Januk are here to give me information as well.”

They both nodded in unison.

“Before we start why don’t we all sit and have something to drink.”

“I’m sorry. Would you all please sit. I have water. Is that alright.”

“She is so sweet, Loeum picked a perfect mate.” The godor healer said with a smile.

“Agreed, Elphin will be a nice balance. She would calm his temper.” Jayla injected.

“Water will not do for this situation. I have brought the wine of Anore. It has been in my home since I was born. So it is aged well.”

“Anor wine. I have not had any since I was a young female.” Cadidia said as she found some cups to pour the liquid in.

“You had Anor wine? But your godor?”

“Like I said I had it when I was a young female. I had to scratched an itch with a Anorie male. But that is a story for another situation.”

The woman looked shocked by this woman’s blatant admission of her experiences.

Le’em took a healthy gulp of the smooth wine. That seemed to not only calm her but warm her insides. The beasts were purring in enjoyment.

“So, Le’em is there any questions. That is why we are here.”

She felt her cheeks redden and stomach tightened. She found that she wanted to ask so many things but how would she put it without them looking at her as if she was an idiot.

“Let me start. You have never been with a male and unsure you can handle it.”

She nodded and took a sip of her drink.

“First of all, it is as natural as breathing. The beasts inside of you will guide you in animal form.” Januk said then took a sip of her wine.

“Okay the beast knows what to do, but I will be in human form to mate with the men. Have any of you been in that situation?” She said it pleading with a yes from someone.

“Yes” all three women said and her heart almost stopped from shock.

“Well being on the ship I needed to get energy and I was told by the captain that the males on the ship was off limits. When the ship docked on a planet the captain gave me leave. I would mate with males on these planets often. The only problem was one male would not suffice so I had to have two to get me to an optimal energy level.” Jayla said then looked at Januk.

“I was young and I like two anorie sibling males. My beast wanted both of them. Not for a lifelong mate but for mating heat. It was a very healthy pairing. I left the mating the next morning with a smile and memory that I can never erase from my mind. ” She looked down at her drink and smiled.

“Yes, they have found their lifemates but it was amazing.”

The ladies looked at Cordidia.

“I guess it is my time. It happed in my first heat cycle. I was out looking for some herbs that my mother sent me out for. It only grew by the lake. When I got there, he was there fishing. He smiled and I went over to talk to him. One thing leads to another and we started kissing. We thought we were alone but the other male that I like was watching from the trees. My beast knew he was there before I did. I stopped and looked for him.

He came out into the opening and he told us that he would not tell anyone. But his eyes looked defeated. So the male I was with asked if he like me and did he wish to be with me. He nodded. So he was going to step aside but that was not making my beast happy. So we ended up being in a pile by the water. Once it was over I jumped in the freezing water to wash their scents off. ”

“Why dod you do that? Were you not old enough?”

“Yes I was, but once their scent is on you it drives you crazy with wanting them. Again”

“So you guys just left them so casually. There was no fighting. Everything went well.”

“Well Godor male love to share their females. It is a natural thing for us.”

“The Anorie male is one female to male but Elphin is willing to tramp down that possessive side to be with you.”

“I’m worried they will fight.”

“Jayla will it hurt?”

“They will want to take you at once to claim you at the same time. As long as you make them take it slow it will be enjoyable.”

“My advice let Loeum take you from the back as Elphim takes the front.”

“Our males have a knack for making it feel enjoyable.”

“Yes let Elphim take the front. He will be more aggressive and since it will be your first time he may tear you.” Januk agreed.

The women took another swig and Le’em felt slightly wobbly. She began giggling and the women continued there tutelage Into the night. They put Le’em to bed, as they snuck out.

The ladies knew that she will be fine.

“Thank you Candidia for coming. What happens to those two males. Did you ever mate with them again?” Januk asked.

“Oh.” They laughed in realization that they became her lifemates.

Jayla said goodnight and went to her mate. Her beast longed for the touch of its mate.

Candidia left as well leaving Januk alone to look at the stars.

“Is everything alright?” A male voice asked from behind her.

She knew who it was.

“Tomorrow will be beautiful.”

She smiled and turned to look into the eyes of the male she became very fond of.

They both parted but knew that they will be the next to join. It will be private and announced after it was done. Tomorrow was for the young.

So fire starters are you ready for the mating? Comments are welcomed and hit that like button. Referring people to my site is a great form of a compliment. Thank you all.