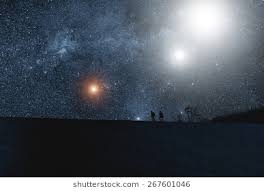 Making it back to the ship seemed more tedious than getting off. It seemed that the population had all come out at once.

It did not deter Jayla and Elphin in getting the newest member to the ship.

The female did not speak and kept her eye’s casted down. Elphin held on to her arm to stir her in the right direction. They arrived to the ship to be greeted by three new faces on board.

‘It must be the new crew.’ Jayla thought.

“Who are you and why are you boarding this ship?” the tall, lanky male that stood before then asked, through stained teeth.

“Move aside. Where is the captain?” Jayla said.

“Get off this ship, you and you kind are not permitted.”

That was all Jayla could stand. Before the man could defend himself, she hit him in groin and when he bent over in pain. She punched him between his ear and jaw causing a clicking sound as he fell to the floor, knocked out.

The captain rush towards them to see what the commotion was about. He seen the new recruit on the floor.

“He was blocking our entry.” Jayla told him as she observed the black and blue marks on the  captains face.

“Listen up, I have told you before I have other crew members. You agreed there would be no problems. So why is there a problem?”

“There is no problem and the fact that we see that they can handle themselves, even better, Macon.”

Jayla looked at the captain, questioning the fact that she used his first name.

This is Cam. These other two is her crew that graciously agreed to help me with  my ship.”

“Captain I fear she will try a mutiny and take over the ship.”

The tall blond laughed. “Why would I take what is already mine. He has never told you about Cam is wife.”

Jayla stood there a bit stunned by the news but she did not let it appear on her face.

“So who is the captain?” Jayla asked.

“Oh he’s the captain. I am just here to help in your crusade.”

“Well tell your man there if he wakes up and tries to take me on again. He will meet space by the bottom of my boot.”

“Jayla who is this your bringing on board?”

“I found another of my kind. I will take her to sick bay. How is Red T?”

“Red T is on board. Wonderful.”

“How do you know of him?” The captain asked Cam.

“We are divorced right? I don’t believe I  have to tell you.”

Jayla walked pass the two of them staring each other down to get the girl to the sick bey.

The clouds rolled in with a dark plumb hue to it. Lorac kept his eyes towards to sky’s in hopes he would see a ship. The seer Junak could not pin point when she will arrive but his mate is coming.

“Lorac are you on patrol again?”

Sanu was his second in command and his closest friend.

“You need your rest. Our people expect you to be fit when it is time for battle.”

“Not to worry. I can not sleep and wanted to keep watch.”

Sanu smiled knowing his friend better that he even knew.

“You are anxious. Why don’t you bed one of the other’s. You have so many that are willing to help you.”

“No I will not take another until my mate arrives.”

“She will arrive Sanu my beast stirs with knowing she is on her way.”

Sanu nodded. “Have you come up with a plan to defeat the Oni?”

Lorac looked at his friend knowing he was trying to distract him but it was becoming an annoyance.

“No. I need my mate to held decipher the text our ancient people had left.”

“She may not be able to read it then what?”

“Sanu enough with the questions. Why are you not bedded with one of our willing?”

“My beast is not responding normally. I am not sure why.”

“So your saying that you can not become firm at the time of joining.”

“Yes.” Sanu looked uneasy letting him know of his situation.

“There is a reason for every thing. The answer will come.”

They both turned towards the north-east of the land. The land of the fore fathers and had their own individual hopes for their people.

Once they defeat the Oni, then they will defeat the scientist who decimated their kind.

As Lorac closed his eyes he felt a strange vibration come from with in him. A sound as if it were a song yet it was a purr.

“Lorac what are you doing?”

Lorac opened his eye’s and stared at Sanu.

“You were making a sound. I never heard that sound before.”

“I do not know what is happening.”

On the ship as Jayla slept in her quarters, her beast started to purr a tune. She slept comfortably.

Out side her quarters Elphin heard the sound. He knew they were approaching their people.

Now he had to find out who the girl was. She seemed Anori but he did not feel her beast stir with in her. Something was very wrong with her.

Hello fire starters. Things are heating up. New crew and a new Anori or is she. If you like the story so far please subscribe and like. Oh tell a friend. The more the merrier. Please comment and let me know if you like how the story is coming out so far. Until next time keep the fire burning.