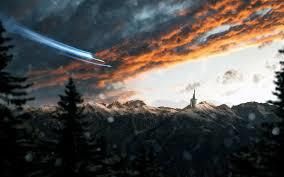 Lorac woke up startled by a loud sound overhead. He ran to the opening of his home, just in time to see a rusted, ship fly over. His heart was beating quickly. His mate had to be on the ship.

He went inside and sat still to center his emotions. He did not want to run out in front of everyone as if he was a child. He breathes in and out deeply several times to calm himself. He spoke to his beast in a neutral voice to keep it calm. When he felt that he had regained his composure he rose and gathered his staff.

His staff was made out of the finest Anorie tree, the core was made from the heart of the tree. What made it special was the fact that the staff can conduct the electric pulse that the Anorie chief creates to destroy its opponent.

He did not know what he was walking into, but he was ready for battle never the less.

Jayla stood rigidly still on the bridge as they approached Anor. She knew her life was about to change and she had to get a hold of her emotions to handle such a monumental time in her life.

“Jayla are you alright?” the captain asked as he glanced her way. One of many times he noticed that she did not move from her chosen spot.

“Jayla come with me to my office for a moment will you.” The captain rose and walked to the right of the deck into his office with Jayla close on his heels. When he heard the door close he turned and looked at her.

“Jayla you do not have to do this. Just because someone said this is your destiny does not mean you have to follow it.”

Jayla stood still listening to what the captain said but she knew she had to go through with it. Her beast has been urging her to mate, since this whole escaped was started.

“Captain I know this is something I must do. I am being lead to it and I do not want to see my people exterminated completely. The scientist have done so with out the impending Oni on its way.”

The captain did not remove his stare. He knew she would do what is called for but why is she acting so unlike her self.

“If you are going through this than why are you so frightened?”

“I am not frightened.” She said as she shifted her stance.

“Ahh, yes you are. No more beating around the bush what is wrong? Is it the mating act or the fact that it will be done around strangers.?”

She looked away for a moment and he knew he hit it on the nose.

“Look every species has customs and you were raised by humans so our customs were rubbed off on you. Our way of being sexual behind closed doors is a custom that was ingrained in us but you are Anorie. When the time comes let your beast lead you. Relax and push the sight of the others away and focus on the mission. You are a soldier.”

Jayla thought on what the captain was telling her to do. She is a soldier. She can do this.

“Your right captain. I can complete my mission.”

He was happy that his pep talk helped. She was so still she almost looked as if she was going to crack under the pressure.

“Will you be there to witness the mating?”

“Not if you do not want me there. I and the other’s can stay on board.”

“I would prefer that. I need to take Elphin and Le’en with me.”

“I understand. Until the ceremony one of us will be with you at all times.”

“No sir when we are alone.”

Over the com the pilot announced to the ship that they will be landing in ten minutes. Jayla will do what is required of her and she will do what the captain suggested. She will let her beast lead her.

Well it is time for the meeting and mating. That will be posted later today, so make sure you keep an eye out for it. Any comments are appreciated and star if you like when the story is heading.