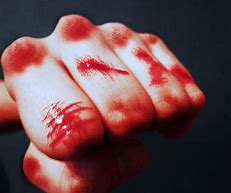 As Nester walked out of the shop, the three gentlemen walked up to him and began to surround him.

“We heard you are looking for a magician to take you under their wing?”

Nester looked at the man that decided to be the leader of the three. He wasn’t much of a threat but he was the one bold enough to speak.

“Do you not live in this world or sumthin? The queen has decreed for us to turn anyone who have magical ability over to her , so they can retrieve the sword.”

Nester proceeded to put down his satchel so he would have a bit more freedom in movement.

“Why you put your bag down boy? Are you planning to put a spell on us? ‘The man to the left said as he edged himself a bit closer. Giving Nester a close up smell of him not washing for days.

“Why would I have to put my bag down to put a spell on you? There is one on you right now.”

Nester snapped his fingers and two of the men that were standing at his right and left dropped. Now the man standing before him, he could not get into the spell. Nester did not have that much control to make a wide enough ring to include him in.

“So you got my buddies here, but not me. Thant means your magic’s not strong boy. I’m gonna kick your ass before I turn you in.” The man said as he clenched his fist ready to strike..

Nester stood his ground. He refused to show any sign of fear. The man swung his right fist, missed his face and hit his aura. Deceiving the man that it was his actual face he hit. He swung his other hand and the same thing happened. He looked confused as to why Nester was still standing.

The man had many fights and no one stood after they were hit by him. He then looked at his right hand and seen a trickle of blood appear on his middle finger. Then another appeared on the other fingers. Suddenly the little finger fell to the ground as if it were sliced up in perfect rings.  Showing the dark bone marrow, the bone, then dark red muscle housed in a ring of flesh.

Soon after the other fingers followed. The man stood there in shock as he held out two stumps that once had hands, just a few seconds ago, in front of him. He was in shock. Nester bent over and grabbed his bag and left the stunned man standing in front of the store bleeding out over his friends.

Nester made it half way out of town before he heard the screams from a woman over what happened. He ran as fast as he could out of there.

He turned around after he ran for a while realizing that no one was chasing him. He would have never used that tactic but he was not much of a hand to hand fighter. If he was taken back to the queen she would surly cut his man hood off before she cut his head off his body.

Nester continued to walk in the direction of the setting sun. Hopefully he’ll find some one soon to help him.