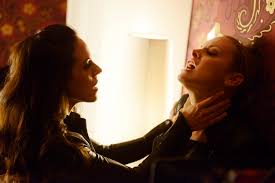 Julius had been stomping around his place for a couple of days, fuming that his pet is being very distant. He knew he should have told her about(888), but that was no reason for her to keep her distance.

He pulled out his cell phone and press the icon that represented Talia. the phone rang three times before she answered it.

“Hello” she said into the phone. But her voice did not sound right to him. She could not possibly be still upset.

Well she still was addressing him as Sir, all is not lost.

“I think I have given you enough space to think about things.”

Okay this did not sound at all like Talia.

“Talia I want you to say what ever is on your mind. Without worry of punishment.”

Julius sat on his arm chair waiting for the flood of questions and anger. Instead what he received was the reserved.

“I am alright. I did not appreciate being kept in the dark about your former fiancé but I am cooping.”

“Then I would like for you to be here with me, tonight.”

There was a congested pause between them.

“How about I meet you at the club and then we will see how things go.”

“See how things go? Are you trying to get out of our arrangement?” Julius heart felt an odd pressure.

“No, I am not trying to get out of our agreement. Up until just recently everything was great.”

“I will meet you at the club at ten. Is that alright Sir?”

“Yes, my pet. See you tonight.” Julius hung up, as he normally would do.

He sat there thinking, ‘ why was it so important to meet at the club and not come back to his place.’ Regardless, tonight Talia will be coming home. He paused in, thought. This was her home. He already put her in his life permanently, without realizing that she was there.

The  time was exactly ten o’clock. Julius arrived ten minutes earlier making sure that he was there when she arrived.

A dark blue Lincoln town car pulled up in front of the club. Julius heart increased it’s pace in anticipation of seeing Talia.

Talia stepped out of the car dressed in a shimmery gold dress. At the waist there was black stripe that accentuated her hips. She stood an inch taller than normal. Julius looked down to see stiletto heels in gold and black. Her face looked flawless.

Lips picked up the glare from the clubs outside light. Her cheeks had a shimmer of gold and her eye’s. Her eyes looked as if you were looking into cats eyes. They were intensely looking at Julius waiting and watching his every move. It made him feel as if he was the main dish on tonight’s menu.

“Talia what is going on?”

She smiled at him, not the smile that she usually gave him. It was a smile that hid something behind it. When he was about to question her again Johanna and Grant was walking towards them.

“Wow, Talia you look hot. To bad Julius has you on lock down.” Grant said as he pat Julius on the back.

Julius looked proud of Talia, but he was still wondering how the night was going to unfold.

The music was epic. Every one was out on the dance floor. Talia and Julius had to sit the song out since they dance to two other songs before the one the DJ just put on.

Then there she was. Chea. She was gyrating on a young man who seemed to be so turned on by her movement that he looked like he wanted to take her on the dance floor. The song came to an end and Chea made her way over to their table.

“Well I see the both of you have returned.”

“What do you want, Chae?” Luisa asked using a voice Talia only imagined that she used on her sub.

“Hello to you to. But I was speaking to Julius and his pet.”

Talia rose from her seat and began to walk towards the bathroom until Julius stopped her before she left.

“Where are you going Talia?”

“I need to go to the bathroom.”

He let her go, when she gave him a look that he had not seen before.

Talia walk slightly past Chae and stopped slightly near her.

“Would you accompany me?” Talia asked Chae

Luisa, Johanna, and Alicia looked at each other and stood as the kept the women in front of  them.

Once they all entered the bathroom and the other women ran out feeling that something was about o go down.

“So what do you think your going to do?”

Talia looked and smiled at her.

“I will tell you this once and I know your an educated woman, because Julius would not be able to be with someone who wasn’t.”

Chea folded her arms ready for what was to come. Or was she? “Well now I’m intrigue.”

“Well I won’t make you wait any longer. Your cheap tactics in getting Julius back will stop tonight.”

“Will it, pet? Last I heard Julius is the Dominant and not you. I could have him right in front of you and you have no say.”

Normally Talia had great restraint but tonight the gloves were off. She backed Chae up against the bathroom wall and grabbed her by the throat.  Whispering loud enough in her ear that the other women could hear.

“You had him and you lost him. Do not think you will ever have him again? I did some digging Chae. I found out that the man you left Julius for returned to his wife. Everything he promised you was taken away and from my understanding he even took back the ring he gave you. Now why would a man go back to a wife he left for you? I know because he found out that you were sleeping with his personal assistant in the apartment he rented for you. You just couldn’t keep those legs closed, could you? Listen to me, keep coming for Julius and you will not only feel these nails sink into your throat. Do I make myself-clear?”

She nodded her head while gasping for air. Letting her go, so she could breath and Talia turned to look at herself in the mirror. The ladies looked at her in shock and awe.

“I am going to call the police and have you arrested for assault.”

Talia laughed. “I wish you would. The report would just get buried and I will still be free. Now if you really want to be assaulted, give me just a minute to add a little more lip gloss”

Chae looked at Talia in the reflection in the mirror and noticed that her lip gloss looked a bit to sharp realizing it wasn’t lip gloss.

Once the door closed behind the frightened Chae the three women that stood to the side was still in shock.

“Your sure your not a switch?”
They all bursted out laughing.

Talia smiled and walked out the bathroom just to be greeted by Julius standing before her.

“Can I ask what took so long in the rest room?”

“Julius let’s just say that you pet has wicked claws.” Luisa said with a look of admiration on her face.

“Sir is it too much to ask for us to leave for the night?”

Just looking at her was stiring his blood and he could barely restrain himself much longer. “It’s not too much at all.”

After they said their good night and stepped out of the club. Julius grabbed his pet and kissed her as if he had never kissed her before. His arms held her close to him and his hands roamed down to her supple bottom wanting to feel her bare skin and not the silky dress that covered it.

Breaking the kiss they both stare intensly into each others eyes.

Their attention was drawn to the car and they realised that they were still standing before the club.

“Yes Sir.” she said with a smile that promised a good night for the both of them.

Well fire starters the heat is building and it will be given to you in the finale post. How did you like Talia truth revealed? All comments are welcomed.