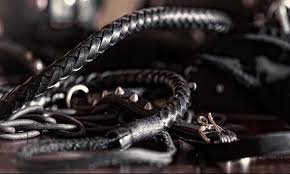 (Discipline does not always mean punishment)

Julius left Talia in bed to sleep for a while. She was drained from the experience. He knew exactly what his pet needed.

Talia woke up and noticed that Julius was not there. She climbed out of bed and seen and out fit placed on the bed for her to wear. there wasn’t much to it but she didn’t mind putting it on for him.

She walked down stairs and seen Julius sitting on the sofa reading something in his lap top.

She smiled and funny enough she really did not mind not speaking. Maybe she was just getting used to it.

“So, pet I want you to follow me into my study.”

Julius rose from the sofa. He was wearing black slacks and a white tank top. On his left wrist he was wearing a chrome looking watch. He was looking very handsome but she could not tell him this.

As they walked into his study, that was lined wall to wall with books. He led her to a small table that held twenty books on it.

“I want you to notice that I have put tabs on certain pages of every book. I want you to memorize the sentence or the word that is underlined. How is your memory pet?”

“We shall see. Once you have completed the task I want you to come to the front and stand with your hands folded behind your back and prepared to answer my questions.”

Julius left the room and left her to it.

“The best and most beautiful things in the world cannot be seen or even touched — they must be felt with the heart.” — Helen Keller

“No one can make you feel inferior without your consent.” — Eleanor Roosevelt

The quotes and  words went on. Talia was not sure where Julius was trying to convey to her. But she pushed all doubts and other thoughts out of her head so she could concentrate.

It took over two hours before Talia was confident that she memorized what he assigned for her to do. She found him in the front with his lap top. He was talking on the phone and seen her walk in. He told who ever was on the phone he will call them back.

“So are you prepared pet.”

“Tell me the quote from Oscar Wilde”

Talia took a moment before it came to her. “What seems to us as bitter trials are often blessings in disguise.”

“That is correct. Can you tell me what the word “Pit” means to you?”

Talia was thrown off. He did not tell her to find meanings even though it was a simple word.

“Do you have any idea why I had you memorize quotes and words?”

“You are going through a trial in your life. Your eye’s show that you have fallen very deeply within your self, since you had to use your power and suspend your friend. You came here and was defeated by your own inner turmoil.”

Talia stood there and was shocked at what Julius was saying.

“I was a submissive once. My dom was very rigid in her thinking that a sub and dom dynamic must proceed in the traditional way. The inferior quote I made you memorize was my way to get in your psyche that I do value you and care for you.”

Talia could not hold back the tears that started to stream down her cheeks.

“Talia why did you go for a position that gives you the power to hire and fire people? When I met you, you definatly were acting a bit bratty and guarded. But it did not convey power. Getting to know you better you put on this cape showing you’re in control but you would prefer it better if I hold your hand or for someone’s approval before you say it is okay.”

Talia wanted to crumble but she stood there as best as she could with her hands behind her back.

“I was taught that I must be strong in every thing or else I will get walked on in life.”

“Who told you this? Your mother?”

“Is your father still in the picture?”

“He’s in my life but they are not together.”

“Listen there is nothing wrong with being strong, but there is grace in showing your weakness. When I realized you were the perfect sub was when we spent the first night together. When I let you have what you wanted. You did not realize that I was in control of that whole scene and you allowed it.”

Talia recalled of what happened and it seemed like a mutual give and take.

Julius chuckled at her confusion. “If the sex we shared had you telling me to move a certain way or you positioned yourself in a way that would make you feel good. Then I could say it was give and take. But I just took. I wanted to taste you and I did with out you denying me. I said it was for you but it was really to see if you would let me lead  and you did.”

Talia looked at him with a look of understanding.

“Pet while we are in this relationship I want you to say this every morning, I am who I am meant to be and what ever come only enhances me.”

Julius stood up and went over to Talia. He took her chin and raised his face so she looked him in the eye.

“I am your dom and I will cherish what you surrender to me, pet. Now go to the kitchen and prepare a meal for us.”

She looked down, not wanting to show her doubt.

“Say what it is your thinking.

“Well that is a task I want you to improve on. Tonight is no exception. Go and create dinner.”

She walked into the kitchen and wiped the dried tears way. She could do this. He did not say create a master piece. Just dinner.