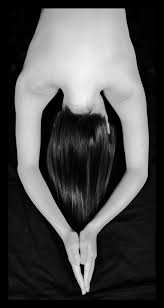 Talia woke to a thud sound. She cried herself to sleep from the punishment that Julius handed last night. She went to the adjoined bath room and locked both doors.

The bathroom had over head lights that dim or brighten by the switch on the wall. She put it on bright and turned to look at her bottom in the large mirror over the double sink.

It was not a bright red and a slight hue of pink. She touched it with her hands and it was not radiating any heat. She didn’t understand how she was getting turned on by him spanking her. But she definatly was.

“This is twisted.” she thought to her self. She turned on the shower and stepped into the warm spray. Feeling the warm water beat against here skin, it felt like heaven. She had a bath puff that she used with this shower gel that had an invigorating scent.

As she lathered up her body and the spray of water changed, instead of a steady stream it was became a pulsing spray. Alternating with warm and hot water. Her body was getting stimulated by the alternating pulses. Her nipples hardened and she washed them vigorously until they became tender to the feel of the softly pelted water sprays.

She added more soap to the sponge and sent it the throbbing junction between her wet thighs.  She turned so the water hit her cream, colored, rose bottom and leaned over spreading her legs about three feet across. She took the soapy sponge and began to rub against her unrestrained, swelling, crux. The friction from the sponge and the heat of the water hitting a warmed channel felt exquisite.

Her legs began to quiver as a beautiful burst of orgasmic wave went through her. She finished washing her self off and then dried. She walked out the bathroom with Julius standing there looking at her heated skin as if he knew what she was up too.

“We will be going out in an hour.” He said as he smiled then walked over to give her a soft kiss. “I see my pet likes to play all alone.” he kissed her on the forehead and walked out the room.

Talia’s breathing came out rushed as if she was holding it, like a child being caught in the candy jar. ‘But she did get caught, didn’t she?’ she thought.

The day went by quickly. Julius took her upstate to a vine yard where they tasted all types of wines. He bought a few bottles for them later.

They also went sight seeing for a bit and Julius arranged for them to have a picnic in a beautiful isolated area.

They talked and laughed enjoying each other’s company. Talia knew she was falling for Julius but she was not ready to admit that to him or anyone just yet.

“Talia I bought you an outfit that I want you to wear tonight. We are going to the club to meet up with my friends.” He said smiling.

Talia nodded, noticing that he switch the playful banter they were having to a command.

“Beautifully done Talia and I did not have to correct you.” He leaned over and gave her a kiss.

The day went by so quickly. Julius drove home and they both went to get ready to go meet his friends at the club.

Talia finally seen the dress he wanted her to wear. the top was closely fitted in a heart shaped bodice and the bottom swayed freely. When she put it on she noticed eight zippers going down from the waist to quarter thigh. But it was hidden by the fabric. He also bough her strappy heeled shoes to go with the outfit.

The bracelet went wonderfully with the outfit. Julius walked in from the bathroom and stood there looking her over like a pit bull looking at dinner.

“Turn for me.” He said. She did as she was told and he walked closer to her. When she stopped in front of him, he kneeled down and reached under her skirt. She felt him pull her thong down for her to step out off.

He stood up and said as he threw the thong on the bed.”All I gave you to wear is the dress and the heels. That’s all I want.”

He wore matching shirt and black slacks. Any woman would definatly want him and he smelled so good.

“Are you ready to go?” He asked. She nodded yes.

They arrived at the club and the music was vibrant and loud. It made you want to dance. When they went in Talia seen the couples she met before. They gave each other hugs and the dom’s, slapped Julius on the back as congratulations for his sub.

Talia stood there listening and not saying a word. Julius whispered, ‘you can speak’ in her ear. Talia thought that this was too much control and it was just speaking but she did say she would try.

They all found a place to sit and talk and drink. The music had her feet tapping and the other’s must have felt it as well. They all stood up and danced. Well more like rubbed on each other with clothes on.

Talia and the ladies excused themselves and went to the ladies room to freshen up.

“The music is on point tonight, right Johanna.” Alicia asked as she made her way to the empty stall.

“Are you loving it, Joanna?” Talia asked.

“Yes why do ask?” She waited for the answer.

“It’s just that you immediately said Grant is loving it.”

“Listen when Grant love’s it. I love it because tonight I will love what happens even more. Now do you get it.”

“We are aloud to enjoy our selves Talia.”

“So Talia Julius told me you have an assignment.” Side Luisa as she fix her lip stick.

“He told you?” Of course, I am his friend and another dom. So he figure I would be able to help.

“I have to be able to take him fully orally and swallow.”

The three ladies laughed as if that was none issue.

“It’s really not funny and its not easy either.”

“Yes, it is. First how long can you hold your breath?” asked Alicia

“How long can you hold your breath?”

“Well you will have to start by learning how long you can hold your breath. Because when he goes down your throat the fear of suffocating sometimes kicks in. That causes panic and you gag. Then you should invest a spray that numbs the throat. That will help not to kick in the gag reflex also, once he goes past the uvula. If there is a certain sweetener you like. Just before he cums put a tip on your tongue. When he comes it’s sweet. Because all of it is not going to shoot down the throat, honey.” Alicia said as she applied pink lip gloss on her perfectly heart shaped mouth.

“Well I like to take a three shots of fire ball and it numbs my throat right up.” Johanna said.

Then all three women looked at Luisa and waited for her suggestion as the only Dom there.

“Listen to them. I have no gag reflex and I always could swallow. Never had a problem. Ok ladies let’s get out before they punish you for making them wait.”

As they walked out. Luisa held on to Talia and said, “If it’s mental you have to find a way to make it ok for your self. We can tell you mechanics of things. You have to allow your self to enjoy it, darlin.”

After her third shot of patron and her tenth dance with Julius. They headed to a secluded booth.

“Your enjoying your self, pet. I love to see the happiness dance in your eye’s.” He said as he kissed her. She loved the way the liquor tasted on his tongue.

Talia smiled and just rest her head back on the booth. As her eyes were closed she felt her side zipper go down and Julius hand in her skirt. She opened her eye’s and looked at him taking a sip of his drink.

“Don’t look worried. Trust me.” He said as he spread her legs apart. He spread her lips apart and played with her awaiting nub and tried her best not to look aroused.

“Here suck on this ice.” He whispered as  two fingers penetrated her wet cavern. Pushing and withdrawing to the beat of the music.

” Come here and sit on my lap.” He said husky. She thought it was a bad idea. she will leave him wet, but she did as he asked. The liqueur must be making her a bit daring.

She felt her back zipper open. As she sat down on his erect shaft he let out of his slacks. She let out a slight moan.

“Now rock one me as I play with you.”

This is so risky and hot at the same time. She was not going to last.

“Oh my naughty pet, squeezing already. Fine.” He lifted a glass for her to drink and as the strong liquid eased down her throat. Julius came and rubbed her clit between two slick fingers and caused her cascading orgasmic flow.”

She dropped a bit of the liquor on her breast and Julius cleaned it with a napkin.

“Now slowly rise and go to the ladies room to clean up. You looked so beautiful cuming for me.”

She rose and he zipped the skirt up. As she slowly made it to the bathroom to clean herself . She was amazed at what she was doing. Was she turning into those loose women they tell you to keep your man away from?

“No that’s not right, because he is mine. But why am I so conflicted.” For something to feel so good, why do they say it’s so bad? She’ll never tell Maggie about tonight. She’ll say she’s a slut for sure.

Luisa appeared in the bathroom, looking like she was waiting for her.

“Yes? Why are you looking at me like that?” Talia asked.

“I’m looking at you with concern. Were you raised in a strick religious back ground?”

“Because I can see the struggle. Why did you become his sub?”

“Because I want to be with him?

“No, it’s more than that. What are you seeking Talia?”

She didn’t know what she was talking about.

“Talia here is my address. Come see me this week and we’ll talk. What a dom and a sub do is beautiful when both are on the same page.”

Luisa left Talia there alone in the bathroom, to gather herself. Once she left Julius was waiting for her with a smile.

So Julius is enjoying his sub. But his sub is conflicted. Will this harm the relationship or strengthen it? Time will tell. If you like please star it and comment. Love feed back.