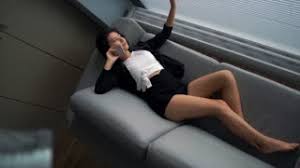 Talia went home and thought very heavily on the discussion she had with Louisa. She did make sense to her and yet she still felt like there are holes in a puzzle.

After she took a relaxing shower and changed into comfortable clothes. Talia called Julius to have a heart to heart. He answered after two rings and he sounded out of breath.

“Are you alright, Julius?”

“Yes, my pet. You caught me when I was working out.”

He laughed while he was controlling his breathing. Trying to get it to a normal pace.

“Yes, I work out. I try to get something in three to four times a week. Now that is not the reason you called. What is it my pet?”

“I went over to Louisa’s house to talk.”

“Oh, when was this?” His tone changed slightly.

“It was earlier today. I am not keeping it a secret.” She said, as she waited for him to speak.

“Go on.” The phone seemed to gain weight in her hands as she spoke.

“She invited me over to talk, because she noticed that I was not that comfortable about what we did at the club.”

“Why didn’t you tell me? I told you I didn’t want secrets between us.” He said sounding a bit annoyed.

“I did not know how to bring it up without you being hurt. I had to sort this out first and she did enlightened me about things.”

“Should I be concerned Talia?” he asked.

Oh man he went back to calling her by her name.

“No. I am still yours. I just  have to come to terms with everything that you entail, that’s all. Are you upset?” She waited hoping that he would not be.

“I am not delighted but I understand that you need space and time to come to grip about my lifestyle.” His tone went from annoyed to calm and a bit tired.

“Is there anything you feel the need to know about me that makes you feel uneasy?” He was giving her an opening into his life. It was up to her to delve in.

“Have you always been this way? I mean have you tried a regular relationship?” Talia hoped he took it as a question and nothing more.

“Yes and they all crumbled miserably. Either I could not make them happy or they could never make me happy.”

“I didn’t claim it early in life. I was with a woman who had a tendency to want to control things between us in the bedroom and yet act differently out side of it. I reached a point in the relationship, when I realized that I was not the type to be treated that way. I didn’t get off being told to do things. When I started having problems getting aroused then I knew it was not for me.”

She listened to him and then a thought occurred to her. “But you thought of me as someone to be controlled?”

“No, at first you seemed like you had a wall around you. But I remember something I learned years ago. That walls were not always built to keep people out. Some times there built, so people can not see what’s inside. When I suggested a book, you immediately hid behind a wall of “no’s and I am not into”. You protested so much you revealed more than you realized.”

She didn’t realize she was doing that.

“Are you still there pet?” He waited for to respond before continuing.

“After I gotten out of that relationship, I did a deep soul-searching sabbatical. I refused to be with anyone until I was ready and knew what I wanted and who I was.”

“Yes. I had seen someone before you and I found out that she was fake. She claimed to be a sub and turned out she was a switch. There is nothing in me that required to be dominated. Also, I found out she was taking the gifts I had given her and selling it. She would not wear anything that showed that she was with me. So when I was at the club with her, other’s would try to claim her. She did not go by the rules, actually she changed them at whim. When I confronted her about what was going on. She just brushed it off by asking me if I wanted to punish her. So I took the contract and terminated it.”

“How did she react?”

“Let’s just say I had a restraining order against her. I refused to go by what a person claimed to be. I follow my gut now and I found you. The last I heard she is with a dom in Chicago. I pity him. Is there anything else?”

“I wasn’t fully comfortable with having sex out in the open.”

“I feel that it is a private thing between us that should remain private.”

“Were you ashamed of what we did?”

“Is that a hard limit for you?”

“Hmmm. The club? What if It’s outside, or a room in a friend’s house?”

“I guess as long as I feel that no one can see us.”

“You see I do have a bit of a exhibitionist tendency. I can see how I can up hold your hard limit and at the same time pacify my wants. Now pet I have to return to my exercise. I will see you soon.”

Julius hung up the phone. leaving her to her thought’s. She really was falling for him hard.

“Girl it is time to have fun and not think so much. He must look sexy all glistening from his work out. Now I sound like a perv.” She said to her self.

What is going through Julius mind on how to pacify himself? Hmmm I would really like to know, don’t you? Now if you like how it’s going with Talia and Julius let me know. Star and comment.