The call of the Dhampir chpt 8 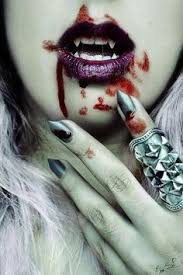 The smell of blood swirled around the dead as if it was like freshly baked cake. The mansion was buzzing about the smell. No one could pin point where the smell was coming from. Which was a miraculous feet since they had a high sence of smell.

The prince had left that morning and there was no one to keep Abella in check. Abella walked down the stairs dressed in lace and satin dress. The color seemed to be a green but the amount of blood that was soaked on the dress it was almost impossible to distinguis the true color.

“Listen to me all of you. I know that the prince has his spies watching me. I have personally dispatched a couple that I know of. If I find out who else is giving him information about my coming and goings I will gladly add your blood to this dress. Have I made myself clear?”

Not a peep was heard. The others stood watching her with bared fangs and anger in their eyes. In the shadows Mimi hid. She will get a message out to him once the sun rose. Until then she’ll keep to the shadows.

“Wakey,wakey” Adorjan heard before a cold splash of sea water drench him. He sat up with a start.

The girl that was up in the tree was standing before him laughing.

“Was that really that funny? How did you get here?”

“Oh you hit me with two questions at once. Let’s see. It was hilarious, you look like a wet cat. Second question, I came over with my father. Now answer my questions. Why are you sleeping here on the boat and are you hungry?”

Adorjan got up and shook off the water that was still dripping from him before he answered her.

“I am waiting for the twins to come back and I fell asleep. I am a bit hungry. Why do you have some food you could give me?”

She smiled and climed down from the boat and started walking towards the houses. “Are you coming or not?”

Adorjan smiled and climbed down from the boat, then followed her. He did not realize how close in hieght she was to him, since the last time he seen her she was laying down in a tree. They walked for about five minutes before they stopped in front of a house.

“Before we go in I think it would be wise that we should know each other’s names. I’m Creya and you are?”

“Adorjan is nice, but since I am welcoming you inside I think I will call you Jan.”

She seem very determined that she had to give him a name as if she was christening a ship. He kept his laughter inside until later. He gave her a nod that he accepted the shortened name.

The house was brimming with people of all shapes and sizes. Not to mention color. A woman no taller than Adorjan’s knee passed in front of him and he could swear he smelled a hint of stale water.

“That is Oria. She is a swamp pixie.”

“Oh” He looked around the room and basically everyone looked normal to the naked eye.

“Come with me. Your probably really hungry. We have food in the kitchen.”

“What’s going on? Why is there so many people here tonight?”

Creya laughed at his comment and he could not understand what was so comical.

They walked into the kitchen and a woman with red curly hair down her back was covered in flour.

“Ah, Creya you finally brought the Dhampir. Come in, come in and eat.”

Adorjan felt slightly trapped with the two women in the kitchen.

“Sit and eat. Or is this not what you favor? Do you take after your father then?”

“Okay what is this about? I do not like feeling like I am a mouse in a maze.”

“Ah yes, you are quite the mouse. Oh my excuse me a moment, the bread will burn if I do not get it out of the oven.”

The red headed woman turned and took something that resembles bread out of the oven, but it was pulsating.

“Perfect. The marsh folk do not like their bread to be over done. Now let me introduce my self. I am Inakoraikatoo. You can call me Ina. I am what you call a neutral observer of all the species of this world. I take no sides and I answer questions that I deem is none intrusive on the path you are set upon.”

“Sit, you are safe here. No violence is allowed in my presence ever. Would you like to see what happens if you try?” Ina handed a wicked looking blade she was using as a cutting knife.

Adorjan looked her square in the eyes and seen something roaming behind them. He refused the blade and turned to Creya.

Creya hoped on the kitchen sink and bit into a celery stalk. “that is answer that will be given, when it is necessary. Now sit and relax, Jan.”

He did as she asked since for some reason she seemed trust worthy. “Why did you bring me here?”

“To the point then. I have been watching you since your grandmother died. The vail she had over you and your mother had vanished when she passed. I was shown that you need a companion on your quest.”

“I have no quest and I do not need a companion.”

“Listen, Jan is it? Creya will accompany you on your path. Enough said.”

“I don’t know where I am going. So Creya accompanying me to nowhere is really ridiculous.”

“You do not know your path? How is that possible?”

The red headed woman looked genuinely confused.” Alright enough talking and more eating. Then tonight you will sleep in one of the rooms. Your safe here.”

“You keep saying that?”

“Well, Jan if you would wipe the suspicious look off your face then she wouldn’t have to keep repeating it.”

“Creya help me bring the bread out.” Creya knew the woman can lift a truck if she wanted with no help. Something was up.

The beating of the bats wings gave no comfort to Makalo. Time was running out and Adorjan had to start piecing things together before his lack of knowledge kills him.

Makalo went towards to the east to see Sheri. One of the longest living vampire in the world. Makalo walked toward Sheri’s chamber to be greeted by Kara. The of the few weaknesses he allowed in his life.

“Kara what are you doing here?”

“Makalo do you not miss me?” As he watched the woman before him drop her shear gown revealing a body he came to know all to well. He still questioned her presence in Sheri’s chambers.

He deferred the question until a later time. His body burned from the memory of her body beneath him and her blood coursing through him.

“It can wait Kara.” He said as the door closed behind him.

So my fire starters Makalo has a side chick and what’s the deal with Ina? Why did she ask Creya to help her with the bread? And before I forget Abella’s claws are out, rather her teeth and death is in the air. Hmmm what will happen next? Comments and Likes are appreciated. Until next we meet. Fia xoxox