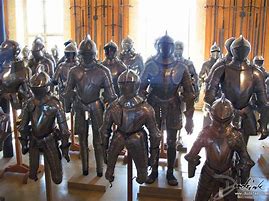 Ryan and Angelica walked day and night for two days only stopping when necessary. They made it to the floating sword only to see the king and queen guards there protecting it.

Ryan knew it would not be easy to retrieve the sword. He had come up with a plan as they made their way to the sword. The plan entailed a sacrifice that he knew that his niece would not understand.

He glanced at her as she surveyed the area as well. He was proud of her and what she had learned in such a short period of time. If he had, had children he would have wanted one exactly like her. Well that will not happen if the plan goes off with out a hitch.

“Ryan what should we do? Nester is not here yet.”

“We do what we set out to do. Nester will not let us down.”

They both looked at the sword once more before they proceeded.

“Remember do not come out until I give the signal. No matter what that crazed queen will say or do. Swear it!”

Angelica did not like the plan but as long as Nester makes it on time. They’ll survive with their heads and the sword.

Ryan was wearing a long tan shirt with a brown corded belt tied around his waist. His pants were the same color of the belt, it flared out a little at the ankles.

Ryan moved into the guards sight. One of the guards ran off in the direction of the palace. The other’s remained. The total number were at least twelve.

Ryan thought it was over kill but the queen her self invented the words over kill.

“Stop before you lose your life.”

“I think you should stop before you lose your life. Did the queen not decree that all magician’s should try to take the sword from the sky. Well I am here to try.”

The guard in the front looked at the magician’s and started to laugh.

“If you fail, you ill lose your head. Yet you come willing to get the sword.”

The other guard started to join in with the laughter.

“I said I have come to retrieve the sword not to lose my head.”

Ryan walked towards the guard. All of them drew their swords and position themselves for battle.

“Oh so now you take me seriously. I take it that the guard will reach the palace shortly so you think your lives would be spared if they get here in time.” Ryan took another two steps closer. “They will not make it.”

Ryan focus his attention to the guard that was in front of him. He began to utter words the guard never heard before.

Suddenly the air began to shift from a light, unnoticeable breeze to a beginning of a storm. It became so strong it was lifting the guard into the air about three feet and they heard several snapping and popping noises come from him accompanied by his screaming.

That’s when the other guards began to charge forward to kill Ryan.

Angelica watched the scene from behind a tree waiting for the signal. Then there it was the head nod. She closed her eyes and began to conjure up a spell of her own on earth the ground trembled and then became soft.

Shock and bewilderment was all over the guards faces as they began sinking into the earth, that was just as hard as a bolder. Now it was swallowing them whole.

The guard that was floating screamed an ungodly sound, then died from the torment of his bone breaking and his heart exploding with in his body.

Angel harden the earth as half of their bodies were still exposed from the waist up.

“Angelica you must hurry and start the spell to release the sword.” Ryan called out as he walked to each struggling guard and killed them one by one.

She centered herself, shutting everything out to create the spell.

Ryan heard the horses gallop towards him on his left. The king and Queen were in the fore front of the menacing brigade.

” So it’s you. You’ve finally came out of your self-imposed exile to retrieve the sword and dethrone me.” The king said glaring at Ryan.

“Blasphemy to say the kings former name. You will address him as king or you will die where you stand.”

“I will address him any way I damn well please. After all I am his older brother.”

A collective gasp was heard as the realization of what was just said sunk in.

“So now you want to be king?” The king asked again.

Ryan laughed and shook his head. “After all these years you think I would want the throne. No brother. I’m here to kill the bitch you call a queen that is sitting right beside you.”

“You will not be warned again brother. Watch your tongue.”

“Were you’re in on the decision to kill Adam or were you too busy whoring that your queen did it with out your knowledge.”

The kings astonishment was written all over his face.

“If he was a magician that could not pull the sword down then he lost his head. Who is this Adam.”

“He is my brother.” The king said through clenched teeth.